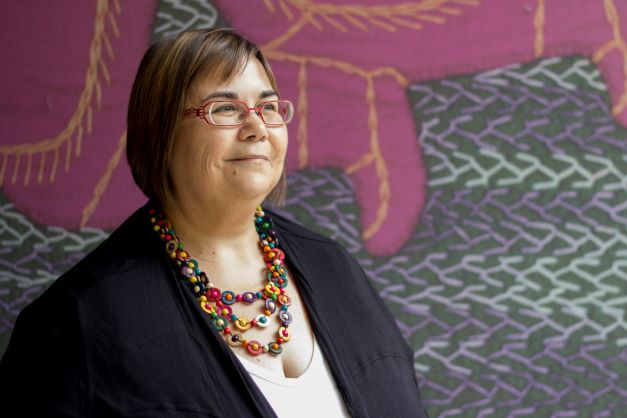 There is excitement right now supporting the expansion of existing initiatives at the U of A and building capacity within the university to support the development of new community driven initiatives. The Supporting Indigenous Language Revitalization (SILR) project in particular is supporting a number of initiatives that professors at the university are currently undertaking including Braiding Stories to Live By and Young Indigenous Women’s Circle of Leadership.

The U of A is building capacity because each of those initiatives are working with Indigenous language speakers,” she says, adding that the youth involved in these initiatives are learning directly from language keepers. “If youth are introduced to this language early on, then there will be a greater likelihood that they’ll want to continue to participate in the language and gain more skills.”

She also points out that students at the U of A are participating in language courses, Cree language tutoring and Indigenous language clubs on campus. Building individual capacity of Indigenous language speakers will contribute to the language education system, deepening its roots in broader society.  “We can teach language as an academic subject, but you don’t need worksheets to learn a language; you can be immersed in language from birth. It becomes your knowledge as part of who you are,” says Glanfield. “Language clubs will support developing a learners’ experience with speaking.”

As Dr. Glanfield reflects on her personal experience with Indigenous languages, she’s reminded that she wasn’t taught Cree or Chipewyan even though her great-grandmother was fluent in both.

There was a period in time where some people felt because of the policies and practices of residential schools that we shouldn’t speak our tribal languages,” she says, adding that the perception at the time was that Canadian languages only included English and French. In Canada, language revitalization efforts are ongoing and those who have contributed to this work are acknowledged in our project initiatives through advisory councils and committees.

One of the aims of the SILR: Building Capacity in Community-led Indigenous Language Revitalization in Canada project is to build intergenerational capacity by focusing on youth, young adults, mentorship/immersion possibilities and pathways that remove barriers to post-secondary education. Programming will also be available for students interested in the structure and syntax of Indigenous languages.

When asked who should be learning Indigenous languages, Dr. Glanfield’s response is straightforward: “Anyone who’s interested in learning.”