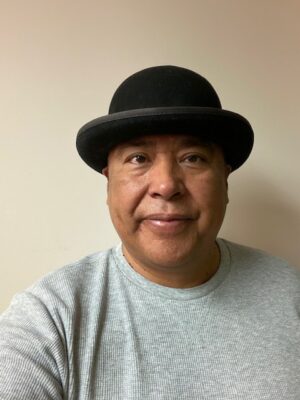 Lyndon is from Alexis Stoney Nation. Lyndon has worked in many different capacities ranging from Corrections Canada, Ministry of Environment, Council member for his Nation and casino president. Lyndon enjoys traveling, hunting, gathering pharmaceutical plants, and attending spiritual ceremonies. Lyndon also presents and engages on Indigenous culture and history to many institutions, governments, and industry. Lyndon’s goal has been to assist in the revitalization, recovery and maintenance of Indigenous languages. 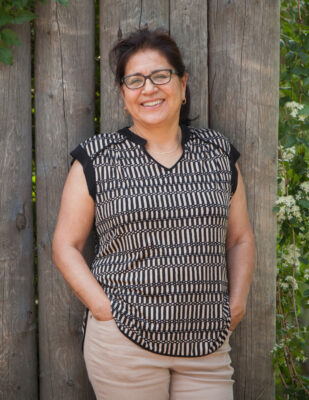 Dr. Betty Bastien, Sikapinaki, PhD RSW, member of the Piikani First Nation, one of the four Tribes of the Blackfoot Confederacy. She has worked for both the provincial and federal governments in the areas of social development and services for 10 years. She taught Native American studies at the University of Lethbridge and in the social work diploma program for Mount Royal College and Kainai studies at Red Crow Community College before coming to University of Calgary’s Faculty of Social Work in 1999. Her experience includes teaching and curriculum design at Red Crow Community College, in the Native Studies department at the University of Lethbridge, and at the University of Calgary.

Honours highlighted are the Alumni awards from the Universities Lethbridge and Calgary, Lethbridge and YWCA and District and Esquao for her distinguished commitment for the Advancement of Women, and John Hutton Memorial Award for Social Action and Policy by the Alberta College of Social Workers.   Her work has carried her internationally, the most satisfying was the Revitalization of Language and Culture Project in Guizhou China. 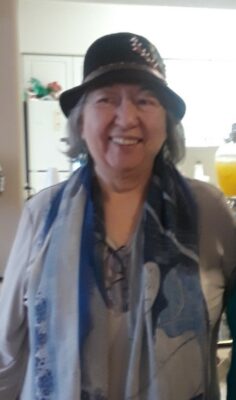 Mary Cardinal Collins is a semi-retired teacher from Treaty 6 Saddle Lake First Nation, AB, fluent Cree speaker and translator – Nehiyaw -skwew -who works in the field of Indigenous languages and Indigenous education for the past 30 plus years. Mary is a 12 year survivor of the Blue Quills Indian Residential school and although she remained a fluent speaker she has had to reclaim her kinship systems and ceremonial activities post the residential school experience. She has experience in Cree language curriculum development at the provincial level and at the national level with the Western and Northern Canadian Protocol. Mary was involved at several levels of leadership during the development, writing and publishing of Aboriginal studies in Alberta education. She has led many workshops on Cree language methodology and classroom activities as Supervisor of Aboriginal Programs with Northland School Division. Lately, she completed a contract with the Southern Tutchone First Nations languages in Haines Junction, Yukon using the Alberta Aboriginal language template. Because of her experience in Indigenous languages curriculum she also has a special interest in Infusion of Indigenous culture in the everyday core curriculum.

I am a fluent Dene Tha’ language speaker. My grandparents are from Treaty 8 First Nations of Alberta. I believe we must hold onto our own cultural values through shared teachings.

My educational background comes from a lived experience and from establishing safe places for our families to promote healthy, cultural-focus, language-based teachings. I am a graduate from Grant MacEwan Community College which allowed the opportunity to have met many powerful Indigenous leaders and mentors.

I have learned that before we speak up on matters, first, we must learn to listen to let others speak and listen to be still and sit with our youth whom we trust will find their own voices and path in living today.

Dene Tha’ language has its shared, knowing, and values that are living ways and voices enriched with my own kinship. Today, our shared knowledge of how our Elders’ voices echo into our hills today.

Born and raised near Rocky mountain House, Alberta, on Sunchild First Nation, 280kms southwest of Edmonton, Alberta. As a child grew up learning two languages, Cree and Annisnabe. Ancestors, great- grandparents, who were medicine men and women, and held ceremonial lodges and taught me an abundance of traditional knowledge and protocols and they originate from a sacred place called ‘Manitou Lake’, near Marsden, Saskatchewan. I also have family ties to North Battleford, Saskatchewan region.

As a young mother in 1984, I decided to return to school to acquire a GED, which I completed in one year. I began my University journey in 1990. From there, in 1992 I graduated with a Health Development Administration University certificate which included management classes and professional development classes. I decided to go and work for my community and as the Health Director. In 2002, went back to University and graduated with a B.A, through Athabasca University, went back to work. In 2013 I decided to pursue  a Masters Degree in Indigenous Languages and graduated in 2016. The journey of my Masters included a ‘Tour Study’ in New Zealand of the Maori people and their reclamation to Revitalizing their Indigenous languages. During my tour of New Zealand I had the opportunity to visit eight schools to see first-hand their work with Language Revitalization. Today you can find me as a sessional language Instructor at the Yellowhead Tribal College in Edmonton. My goal is to help First Nations revitalize the diminishing Indigenous languages in a good way. 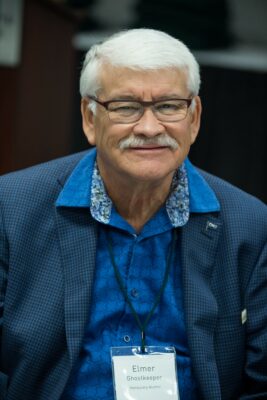 Elder Elmer Ghostkeeper was born to parents Adolphus and Elsie Ghostkeeper at the Paddle Prairie Métis Settlement, Alberta. He is Métis and speaks fluent Michif, the language of Métis people. He is a Spiritualist, father, grandfather, teacher, student, learner, philosopher and entrepreneur. His work is “Weche Teachings”, a partnership of Aboriginal Wisdom and Western Scientific Knowledge, and “Wisescience”, a methodology to understand and solve modern day puzzles effecting Aboriginal People. Elmer has a BA in Anthropology and a MA in Cultural Anthropology and is the author of Spirit Gifting: The Concept of Spiritual Exchange, which is his published Master’s thesis. In 2004, Elmer received the Order of the Métis Nation. He currently serves on the Government of Alberta’s Indigenous Wisdom Advisory Panel (IWAP) and on the new Government of Canada Indigenous Advisory Committee that was created to provide expert advice and participate in the development of policy and guidance for the new federal impact assessment system. 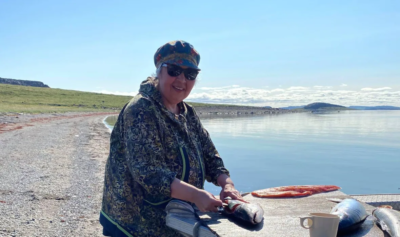 Millie R. Qitupana Kuliktana who is to daughter to Late Tom and Elva Norberg. I am a Mother, Grandmother and Elder in Training. Born and raised on the Arctic Coast where Kugluktuk is my home. I come from ancestry of mixed heritages and raised as an Inuit speaking Inuk. I also would like to acknowledge my experience with knowledge shared with me which is rich in cultural teachings from a strong line of Inuit Women over my 30 years of work history.

My career was based on experience building in the field of education. I was the Executive Director for seven years for School Operations in the Department of Education with the Government of Nunavut. However, being a School Principal at Attaguttaluk Elementary School I felt was my most rewarding career moment as that allowed me to be interactive with all families.

Some of my achievements include, the Sovereign Volunteerism Award for Language Preservation, from the Governor General. The Wise Women Award from Nunavut Territory. Queens Diamond Jubilee Award for Humanity from the Nunavut Commissioner. Language Leadership Award from the Government of Nunavut Department of Culture, Language, Elders, and Youth. All of this and more have been to work towards a nurturing, caring, safe community for my family and other fellow residents to always feel the sense of community. 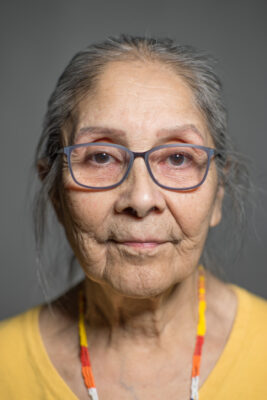 I grew up on Łuwechok Túwé Denesųłiné néné (Cold Lake First Nations), where I attended Cold Lake Indian Day School\LeGoff from 1957-1965. For Grade 9, I attended Racette Catholic School in St. Paul, Alberta, and boarded at Blue Quills Residential School 1965-1966. I attended St. Dominic’s Catholic School in Cold Lake, Alberta 1966-1969 to do Grade 10-12. I completed Grade 12 in 1970 at Alberta College in Edmonton, Alberta. I entered Grant MacEwan Community College in 1972 and attended until 1974. I took 1 semester in Secretarial Arts, 1 semester in General Arts and Sciences, and 1 year in Social Services Diploma program. In 1975, I entered the Morningstar Indian Teacher Education program, of which I completed 1 year in 1976. I took a leave from my studies and worked until 1989, when I went back to Blue Quills Indian College to complete the second year of the Teacher Education Program. I entered University of Alberta in 1990-1991 and graduated with a degree in Education. In 2014, I enrolled in a Master of Arts in Indigenous Languages at the University nuhelot’ine thaʔe hots’į nistameyimakanak Blue Quills. I received my M.A. degree in 2016.

I have had numerous jobs over the years since 1966 to present. I taught in Maine, and Ohio in 1995-1998. In 2000-2003, I taught in Hatchet Lake, SK. In 2004-2007, I was the vice principal at Father Megret High School in Hatchet Lake. In 2007-2010, I worked at Cold Lake First Nations as Denesųłiné Language Curriculum Developer and from 2010-present worked as the Denesųłiné Language and Culture Director.

Advisory Council & Steering Committee
Team
About Our Logo
FAQ
Menu
This website uses cookies to improve your experience. If you continue to use this site, you agree with it.
Ok